In 2022 two apps have reached their first $1M revenue in partnerships with Union Apps. Both of them use Adapty for in-app subscription infrastructure, analytics, and paywall A/B testing.

Union Apps is a publisher for subscription-based apps. They help their partners develop the products, do the marketing, make financial reports, and eventually earn more money.

Development, analytics, attribution. Which services to use in 2021? ⟶

Adapty helps Union Apps make decisions from the earliest stages and throughout the entire app collaboration period.
Before the contract with a partner is even signed, Adapty’s subscription analytics helps Union Apps define if the partnership will be lucrative for both parties. And as the partnership starts, Union Apps grows its partner’s revenue using Adapty’s paywall A/B testing and relies on its accurate analytical data to predict the return on the marketing investment.

The most fundamental decision that Union Apps makes using Adapty is whether the partnership with an app is going to pay off and be beneficial for both sides.
The path towards the potential publishing starts with the metrics audit: LTV, conversion rates on different stages of the funnel, percentage of the paying users, retention rate of the features.
Then these metrics need to be validated. For such a purpose, they run a test, investing around $5k in the user acquisition through Google Ads and Facebook. This test either confirms the metrics collected in the previous stage or reveals that something doesn’t work the way they expected. For verification, they use the cohort analysis and funnels in Adapty.

Adapty’s cohort analysis shows the tendency of the users’ churn and enables one to see the data across all app’s products (or just the selected ones). Filters help to track the data depending on attribution, country, paywall, store, or audience segment.

Adapty’s funnels help understand which steps of the users’ journey might be improved to increase conversions and revenue:

If the metrics are confirmed, Union Apps tests if the app is going to keep up with the ROAS KPI in the context of bigger ads investments. In this stage, more budget is invested in the paid user acquisition with the ASO, influencer marketing, and product teams involved in the experiment.
It’s important for the Union Apps and partner teams that the cooperation become a springboard for the MRR/ARR growth.
This stage also shows if the partnership is capable of achieving traction in the following three months of work and if the teams have a synergy to work together.
If all the stages are successfully passed, Union Apps and their partner app sign a contract and continue working within the framework of publishing.

Working with applications, Union Apps buys traffic, experiments on the products, and tries different approaches on all stages of the funnel: ad creatives, App Store presence, onboarding, paywalls.
Onboarding and paywall A/B testing are handled with Adapty.
One particular test that they ran for their client, the app OctaZone, helped increase LTV and boost its monetization in general.

The test that increased LTV by 30% 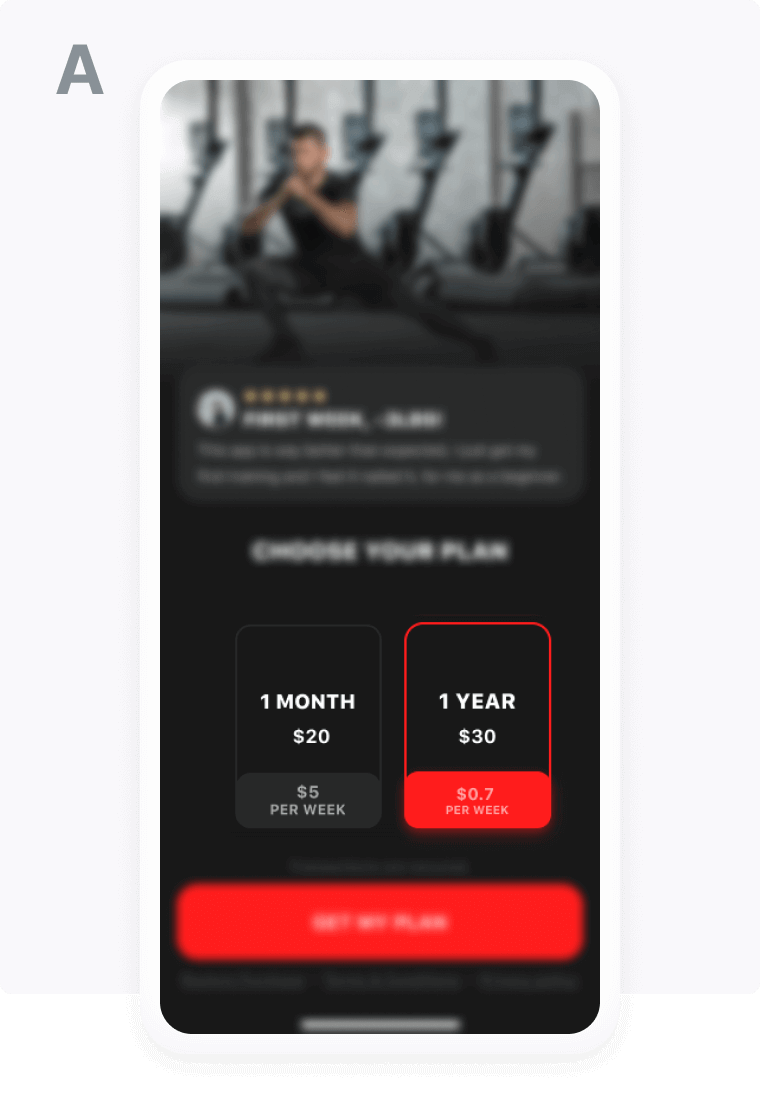 This is how the OctaZone’s paywall looked originally.
75% of the users chose the annual subscription over the monthly plan. As a result, subscription renewal needed a year to occur for most users. As a result, the team couldn’t see a quick return on the marketing investments. 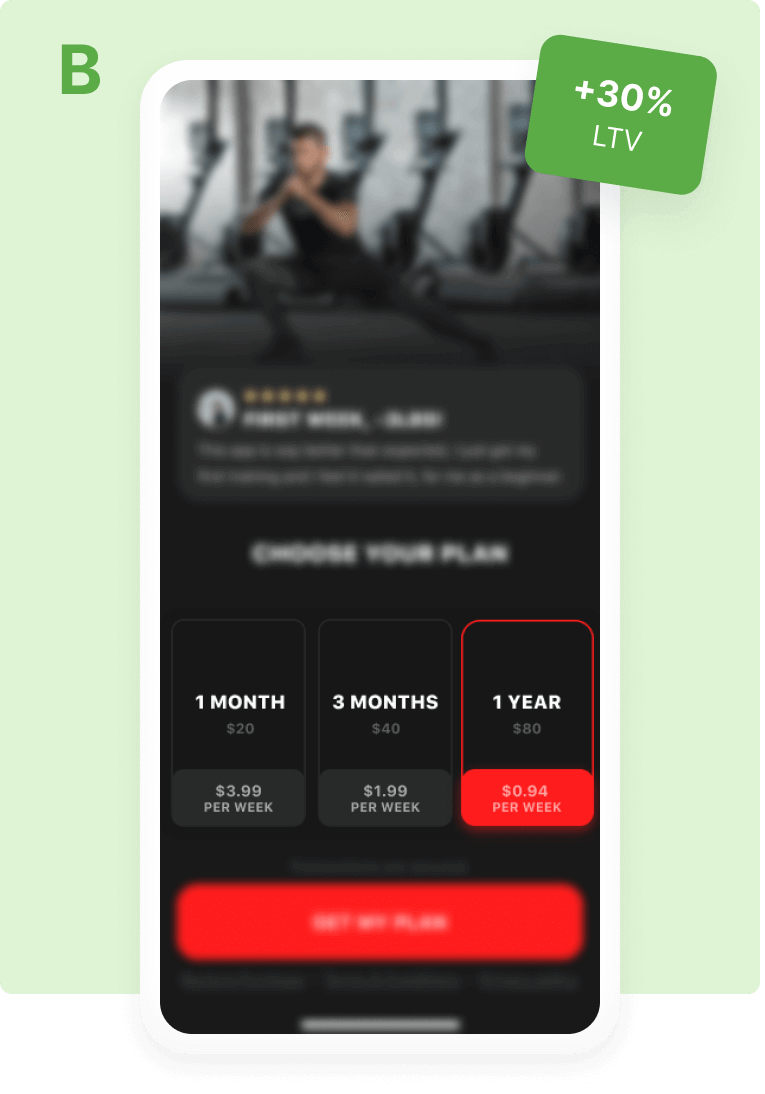 Union Apps suggested a new paywall. They’ve added a 3-month subscription and raised the price for the annual plan.
They launched an A/B test in Adapty to compare the performance of the paywalls.

Why the test resulted in 30% LTV increase

The percentage of the users choosing the annual plan on the new paywall fell from 75% to 17%.
Although the conversion rate from install to subscription stayed the same, the redistribution of purchases in favor of the three-months and monthly options was to bring more money, according to the prediction.
The prediction based on the Adapty’s subscription statistics and Union Apps’ own data showed the LTV increase by 30%, whereas ARPPU increase was expected to be 1.5 times higher, in comparison to the previous version of the paywall. The prediction model took into account annual subscription renewals.

Back in the days, when we were starting, we developed our own service for paywall and onboarding A/B testing. We spent a lot of time, money, and human resources to implement it and we still weren’t able to achieve the accuracy and convenience that we’d aimed for.
We found out about Adapty by accident, on social media. We integrated it within a couple of days and immediately started using it. Now the A/B testing cycle, from the idea to launch, takes much less time and doesn’t require any developers involvement.

Decisions for the future

The Union Apps team has already accumulated plenty of data on subscriptions: renewal rates of subscriptions with various durations, time needed for the return on the marketing investments, optimal prices for subscriptions of different categories, and more. All this data is used to make predictions.
They also rely on the subscription benchmarks from Adapty’s reports though.

As an example, the aforementioned A/B test for OctaZone included the annual subscription, so it would take a year to see the renewal rate of such subscribers. But another option would be to check the benchmarks and try to predict the future revenue:

Prediction, based on the Adapty’s report and Union Apps’ own data, revealed that the new paywall was going to yield an LTV increase, thus helping them decide to keep the paywall B as the main option.

From the first subscriptions
to the million dollar app

In 2022 two apps saw their first $1 million in annual net income under the guidance of Union Apps with the help of Adapty.

To grow Prime Fasting, the app for intermittent fasting, Union Apps experimented with onboarding and paywalls using Adapty, tested hundreds of ad creatives, and used paid marketing channels. The result is ARR growth from $205k to $1M in a span of three months (Nov 2021 – Jan 2022). For the next three months, they grew $2.5M ARR more.

Our revenue depends on the reliability of our partners, including Adapty. Throughout our collaboration with Adapty, we feel the synergy and witness the growth in quality of the product and the amount of features.
We have a vested interest in Adapty’s growth and spend a lot of time analyzing their reports, participate in custdev interviews, provide feedback, and report bugs.
I believe that our collaboration will help grow both our partners and Adapty – as we both have the same purpose of growing apps to millions of MRR.