Prosto App is a meditation app. The app primarily targets the audience of the celebrity Irena Ponaroshku, but it is also aimed at the people interested in meditation in general. Irena Ponaroshku is an Instagram blogger with 2.4M followers. Irena blogs about conscious consumption, ecological responsibility, and living in harmony with oneself and others. 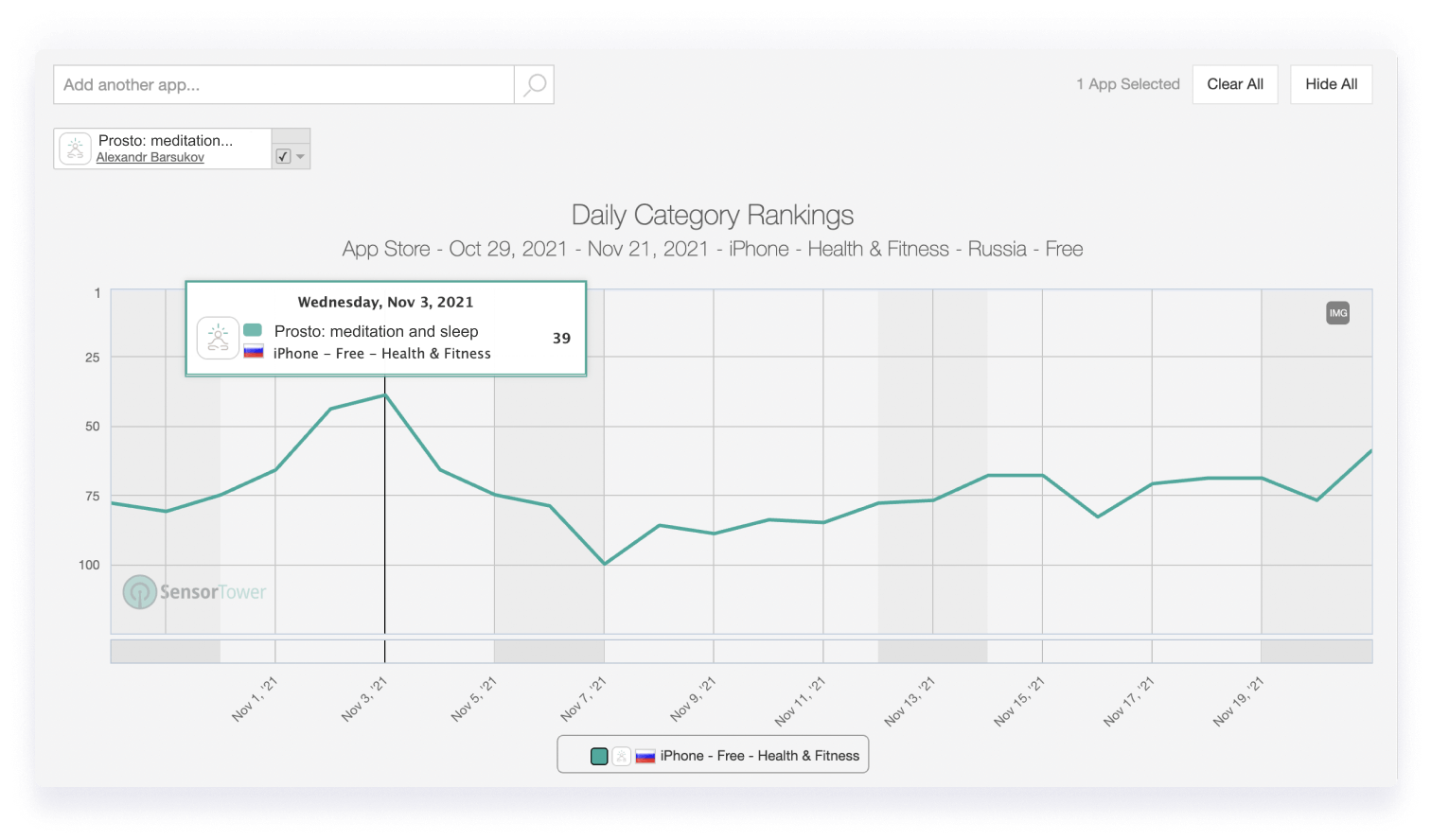 The iOS Prosto App currently has 45,000 paid subscribers. Their goal is to make it the #1 Health & Fitness app.

With Adapty, launching an A/B test takes a day instead of a week

Adapty enabled them to improve conversion rates for each stage of the purchase funnel, thus increasing the monthly recurring revenue (MRR).
Even before they began using Adapty, they were testing their paywalls. Back then, they would have to: create a design task, have the new paywall designed, give it to the developer, have it coded, configure tests, send the app to Apple for review, and then release the new version. Tests usually took a week or more.
Adapty has changed that. A new paywall could be created right in the Adapty's app:

Instead of a whole week, they could now launch A/B tests on the go in just one day:

As the Prosto App team set up Adapty SDK, they had already collected basic analytics and developed some hypotheses to test. Advertisements for the app were effective for hooking users, but the install-to-subscription rate could be higher. Russian users are not commonly fond of mobile subscriptions according to Adapty's recent report. However, Prosto App maintains its high rating despite this lack of interest in the IAP model.

Test that increased revenue by 30%

Prosto App used to offer its users two subscription plans before switching to Adapty: the annual plan for $30 and the monthly plan for $3. Based on analytics, they learned the annual subscription plan was expensive for their users. They assumed that if they were to offer a plan at about $15, their users would be more inclined to subscribe.
In Adapty, they created an A/B test for the paywall and made some changes to the design: 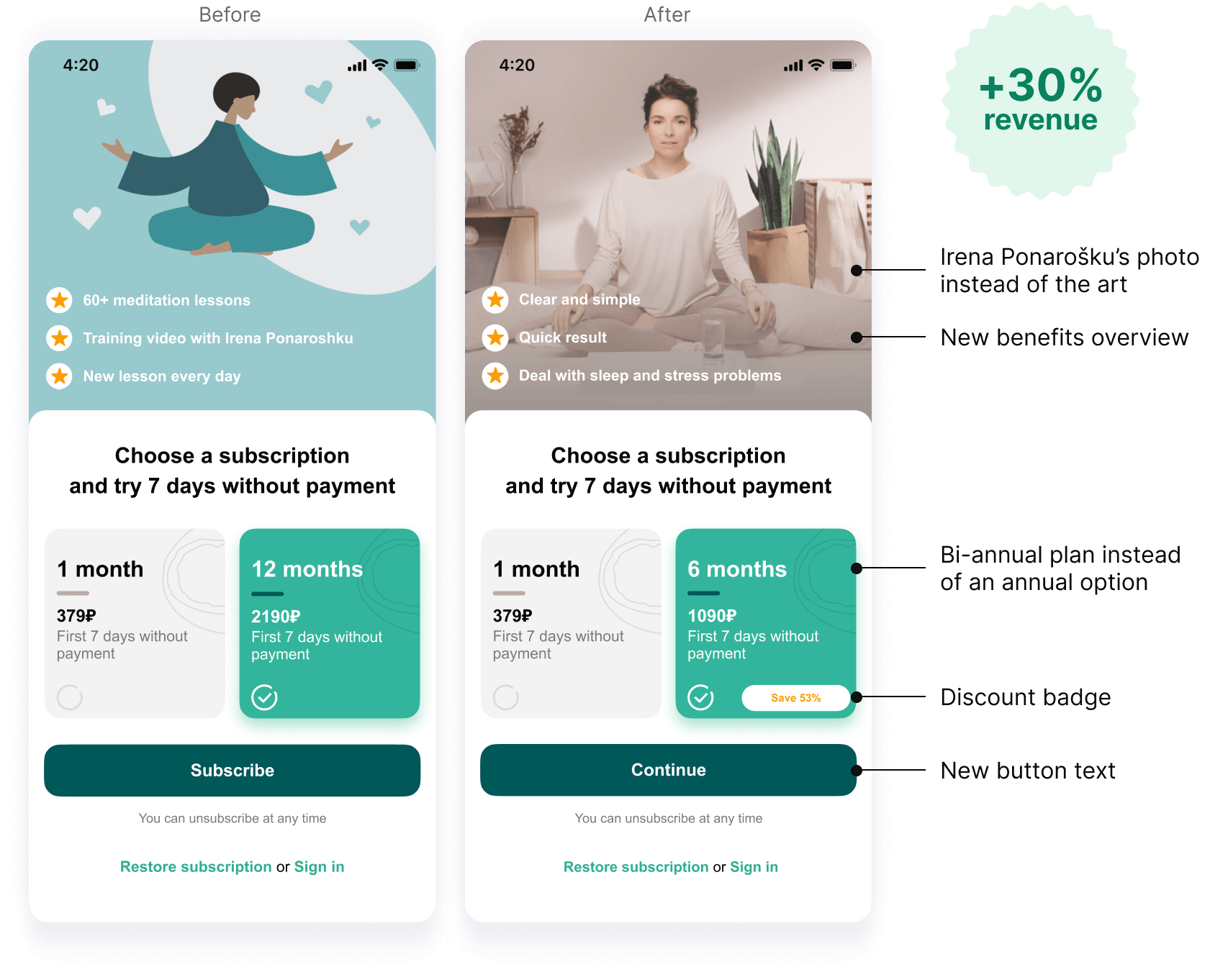 Here are the results of the first test:

This resulted in a lower subscriber acquisition cost and rethinking the team's traffic and ad spending. And, even more importantly, subscribers have now been redistributed. Previously, nearly 6% of their subscribers were on a monthly subscription. After the test, bi-annual plans ended up being quite popular with the users.

Overall, all of this ended up yielding them a 30% monthly revenue increase.

As seen in the chart, their ad budgets remained the same, but their revenue increased. As the number of subscriptions increased, so did renewals.

Paywall testing will be beneficial for you whether you want to acquire new users or retain the existing ones.

We’re planning to be #1, and Adapty is one of our secret weapons.

START FOR FREESCHEDULE A DEMO

Social Kit doubled its MRR with A/B testing for paywalls

How Moonly bootstrapped from $0 to $2.45M ARR with Adapty